Skip to content
Previous Next
The History Of Padlocks

Locks have always existed. As technology advanced, locks and security practices advanced along with it. Among these changes was the invention of the padlock. The base of this idea is a lock that can be applied to something, as well as taken from it if need be.

It’s still unclear where the root origins of the word padlock come from. The prefix pad may mean gate – perhaps these locks were first used securing these. Pad can also mean to walk on foot, like padding across the floor. This usage suggests that a padlock was first used to ‘lock’ access to a pathway, particularly by way of a gate. There are many different takes on the etymology of padlock, but there is a strong case pointing toward the use of a padlock for guarding a gate or a path. Yet another theory suggests that the Vikings were responsible for it. Apparently, tribes of Vikings in the English York settlement used these locks to keep their animal cages closed. Each Viking’s personal land was dubbed a paddock, which sounds a lot like padlock. …Fetched, I know, but interesting nonetheless.

Parts of the Lock 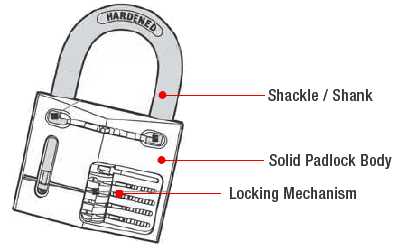 Shackle – The shackle of the padlock has a ‘U’ shape. When the lock isn’t in use this piece moves around freely. The shackle can move both horizontally and vertically in this state – one side is hinged and the other can move as it pleases. The shorter side of the shackle, once disengaged, reveals an opening through which the lock can be taken off or put on.

Locking Mechanism – There are two forms of lock mechanisms: modular and integrated. Modular locking methods are more modern than their counterparts. When opening the lock, the key catches on the cuts of the metal on the inner mechanism. All of the pieces of this lock work together, making it possible or the padlock to re-lock itself upon closing.

Unlike modular locks, integrated mechanisms cannot be taken apart. In order for this type of lock to be disassembled, the lock must be broken by way of the lock body being separated from the lock mechanism. These locks require the use of a key to lock them again. 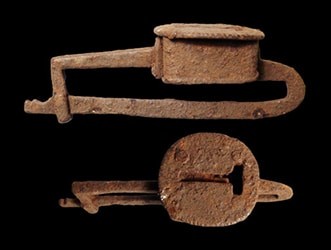 Padlocks date back to the Roman Empire. These locks were rounded and about four by six centimeters in size. The bolt was opened and closed by use of a key. These locks had a chain instead of a typical shackle in use today. More modern Roman locks had two parts: a rectangular shell that was connected to a metal pole. The shackle on this featured a ward spring, which was a piece of metal made in the shape of a ‘v’. 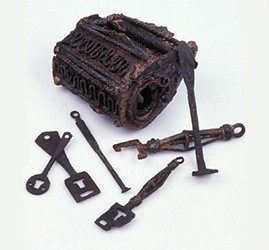 When folks would travel and trade with Asia in the old times, these merchants often used newly discovered padlocks to protect their wares. The lock’s usage and popularity spread and became a common sight among Chinese merchants before the turn of the era. Chinese padlocks were often bronze, like the Roman ones. Skip a few centuries ahead, and we once again look to the Vikings settled in York who used padlocks in order to contain their livestock. You can see similarities between the Viking’s padlocks and their Roman predecessors. 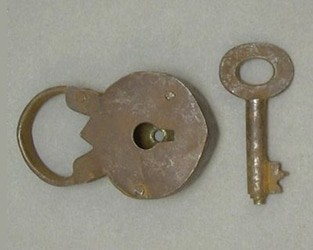 When padlocks came to England, they underwent some changes. Padlocks were often used to protect smokehouses. The food stored in a smokehouse was in constant danger from thieves and hungry animals. These locks were made of wrought iron, and first featured specific notches that corresponded with specific keys. These locks we’re easily picked however, and forced entry was a common issue. 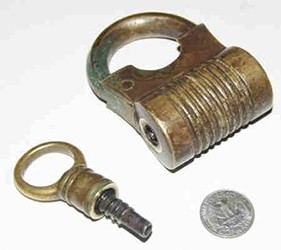 The Slavic regions had their own version of the English’ smokehouse padlock: the screw key padlock! The screw key required the opener to rotate the key rather than simply turn it. The key would then thread into the lock and subsequently be pulled. This would release the spring, which in turn opened the lock’s bolt. These locks had a long run but eventually became obsolete at the turn of the 20th century in favor of new lock innovations. 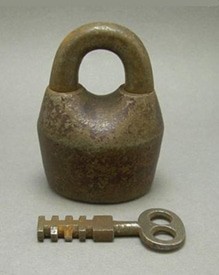 The Scandinavian padlocks were invented in the 1800s by inventor Christopher Polhem. The lock body was made of cast iron and the locking mechanism consisted of rotating disks. The disks we’re rotated by a key that matched the grooves etched into the disks. These locks were in use from 1871 up until the 1950s, a considerable run. 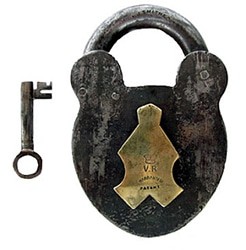 The cast heart padlock was another lock of Scandinavian invention. It was often made of bronze or brass. This meant that the lock was very strong and more resistant than its counterparts. It’s called a cast heart because the shape loosely resembles that of a stylized heart. A cover for the key way called a drop was helpful for keeping bugs and dirt out of the key way. These locks we’re designed with a chain that made it easy for folks to carry their locks around with them. These locks we’re popular among business industries because they stood up well to bad weather.

The Rise of Electricity and Machining

Mass manufacturing became easier than ever at the start of the 20th century. People also had more access to electricity than ever before.  The lock making process became cheaper and easier. This led to many innovations and the overall improvement in the security of locks.

In the 1920s the Master Lock Company that we all know and love released their first padlock. This event really began to shape what the modern lock industry looks like today. When die casting was invented in the 1930s, creating simple, cheap and decorative locks was easier than ever before. Making cookie cutter locks like this had its own set of security issues though, and nowadays these locks have pretty much dissipated into the winds of history.

Padlocks certainly have a rich and interesting history. The changes and innovations of our world made their mark on everything, including the development of padlocks. At this point and time, even the image of a padlock subconsciously evokes a sense of security. It’s amazing how an invention of practical use hundreds of years ago still exists as a symbol and sign of security in the modern era.