Why Honda Keys Won’t Turn In The Ignition?

Don’t try to reason that the key won’t turn on the Honda ignition with things like “It’s too cold out,” or “My key must be worn out”. It’s like that your Honda ignition problems are caused by a manufacturer issue. Honda itself has acknowledged these issues and has subsequently placed warranties on many of its vehicles. An older Honda may not be covered by the warranty, but a newer model’s Honda ignition lock repair could be covered. A repair like this could run you anywhere from $600 – $1,000 at the dealership. Fortunately, there is a less expensive option out there. With Low Rate Locksmith Honda Ignition team you can safe nearly half of that price.

Honda ignition and keys are known to fail and not turn in the ignition %99 of the times it’s a one of 2 issues:

When you’re stuck out on the road somewhere and you can’t get back into your car  because the key is not turning into the ignition. If that’s the case for you, you need help now. There’s always something that needs to be done in this life. Waiting inside of your car because the Honda ignition won’t start is a waste of precious time. Honda have been frequently noted to have certain issues, and a predominant one would be Honda ignition problems. Faulty doors and ignitions are not a new issue with Honda cars. Most all models of Honda cars deal with this, including Honda CRVs and Honda Civic ignition switch problems.

You could probably find evidence of Honda ignition problems going all the way back to 2003. Unfortunately, issues with the ignition on Honda cars can really go back that far! DIY methods to solve the issue of having your key stuck in Honda ignition suggest the use of WD-40 and silicone spray, but there were actually warranties that covered the ignition problems for models like Honda Civic and Honda CRV. If you’re faced with an issue like key won’t turn in ignition Honda, you should definitely call a Low Rate Locksmith for Honda Ignition Lock Repair.

How to Have Honda Ignition Switch Problems Repaired

We have established that the cause is one of two, worn out key or worn out wafers inside the ignition. Now how to deal with them.

Honda door and ignition issues are largely familiar to the locksmith community. As a result, a professional locksmith would know exactly what to do to solve the key won’t turn on the ignition Honda. Having the job done by a mechanic will cost you more due to ignition replacement, labor fees and key replacement fees. On the other hand, an experienced locksmith can take care of Honda Ignition switch problems faster and for a lower price. A locksmith will come right to your location and fix the Honda ignition problems in a manner that allows you to keep your current keys. That saves money in the end.

So, what should you do when your key won’t turn on the ignition Honda? A little know-how about the make-up of your ignition could help! Just know that there is definitely a cheaper option than having your car towed to the dealership for Honda ignition lock repair. Hondas use a split wafer system in their ignitions. The wafers used in Honda ignitions are pretty sensitive to dust and dirt. This, however, is not the primary issue at play with Honda ignition switch problems. The issue you’re dealing with likely stems from a wafer that is worn out. Every time you insert your key into the ignition of your car, a tiny tip of the wafer is being shaved off, bit by bit. This can cause the wafer of your ignition to wear out over an extended period of time.

When the two halves of the wafer are attached, the key is intended to pass through the opening. As the wafer’s tip gets worn down, it becomes harder and harder for your key to grip the wafer when you attempt to turn the ignition. You may find yourself wiggling the key inside the lock in an attempt to get it to turn. Many Honda models are at risk of this common issue among the band including Civic, Pilot, Accord, CRV, Element, and Odyssey.

If you take your faulty Honda to a dealership, they’ll most likely suggest that you have your entire ignition switch replaced. They might even throw in replacing all the locks on your Honda. As a result, you’ll wind up paying SO MUCH MORE MONEY for a Honda ignition problem that could’ve been easily fixed for much less money. It’s faster for the dealerships to replace the entire ignition switch rather than to take the time to pull it out and fix it. You could wind up paying over a thousand dollars for something that could have been taken care of faster and for a much lower price.

As for key replacement related to Honda ignition problems, your key will likely have been damaged by the bad wafers already. You may even be able to spot the damage on your key – look for deep engraving marks on the blade. If you’d like to prevent further issues (and take advantage of your locksmith already being on-site,) ask your locksmith then and there to make new keys for you. It’s better to be safe than sorry – if you’ve been stranded in the middle of nowhere with your Honda once before, it’s very likely that you’ll want to avoid the same thing happening ever again.

If there are no unforeseen complications to deal with, your ignition should be repaired by a local, professional locksmith in less than an hour. Yes, you heard that right; under 60 minutes. If you think about the everyday things you CAN’T get done in an hour, it’s amazing to think that your Honda can be up and ready to run in such a short time. Take note: some models take longer to repair than others, due to the variation in design. Honda Civic ignition switch problems are different from Honda CRV or Honda Element issues. The wheel can get locked when removing the ignition switch. Although this is a rare occurrence, this problem may necessitate the complete removal of your ignition switch assembly and a resetting of the locking pin. Overall, you can expect the cost of Honda ignition lock repair by a local auto locksmith to be around $350 – $500. That’s a big difference from the over $1000 the dealership could charge you! 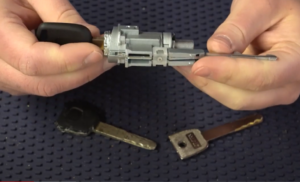 By now it’s pretty obvious that Honda ignition problems aren’t anything new. The issues we’ve outlined in this article so far have contributed to a fall in Honda sales. It’s hard to notice the problem in the very beginning – it usually creeps up on you. The issue could ultimately stem from Honda’s decision back in 2002 to switch to a higher security laser cut ignition key. Prior to this change, Honda’s were targeted for theft on a large scale. One of the advantages to the higher security key system is that it makes illegally duplicating a key more difficult. There are many disadvantages that come with this key system upgrade. The key can wear down to nearly half its size over an extended period of use. This leads to problems like when the key won’t turn in Honda ignition or when your key is stuck in Honda ignition. The ignition can also slip off of its position, causing the ignition key to lock. Good maintenance such as keeping your ignition clean can help to stave off Honda Civic ignition switch problems, but the issues mentioned here are common for Honda’s across the board.

My Key Won’t Go into The Ignition

Your key has probably been damaged due to continued scraping against the wafers that make up your ignition assembly. The worst thing you could do is try to force your key inside the ignition during this time. This can potentially make the issue a lot worse, especially if you happen to break your key off in the ignition while doing so. If your key works in the door but not the ignition, it’s likely that your ignition is at fault. If your key opens neither the door nor the ignition, you should look into having your keys replaced.

My Honda Key Is Stuck in The Ignition I can’t take it out, what to do?

If you’re dealing with a key stuck in ignition Honda, it’s possible that you have an automatic transmission and the gear has shifted. If the gear shifts, it can lead to obstruction. Try putting the ignition on and gently put the gear into the park position. This should enable you to get your key out.

Models and Years you can face with – Honda Ignition and door locks Issues:

Our Company is Locksmith Company In California, Our locksmiths will be in your site in 20-30 minutes from your call or request.

We In Low Rate Locksmith Company serve any city and town in California. Our best locksmith in California waiting for your call.